The Android 5.0 version Lollipop is ready to take on the Indian netizens with Motorola being the first manufacturer for the latest Android version. The Lollipop version is available for all the Motorola X and Motorola G Generation 2 users in India.

What’s new-fangled in the Lollipop version of Moto X?

With the amazing launch of the new Android version 5.0 Lollipop, the facets with which this new version comes in, is almost irresistible and spectacular. Ranging from the all new material design, Moto display and ambient display to pinning an application and faster performance of the Android software, Lollipop has it all to grip the attention of the Moto users.

The existing Moto X phones are rafted with enthralling features and a colorful UI design, heavily based on animatronics’ effects, ripples and with the enticing feature of making every silhouette to look real, Android 5.0 is entirely a world of fascination.

Interlocking apps along with an efficient notification reminder system is the preeminent part of the Android L version. Utilizing the low power relative computing workstation, Moto X Android Lollipop would be feasible enough to react in an intelligent way when any notification or message hits the phone even when the display is off. The all new Moto downtime feature of the Android L is the apt solution when you don’t want to be frequented with the calls and messages rather helps in giving you your privacy.

Android 5.0 also improves the battery performance. Even if the phone’s battery is about to get exhausted the phone gives an alert for the same mentioning the estimated time limit for the battery to last.

Any Motorola X user who has been using the Android Kitkat version for the mean time can now update his phone’s Android version to Lollipop easily. Make sure that the internet connection you are connected to while downloading the Lollipop Android version is fast and efficient and does not hang up in the middle of the process of downloading. A few simple steps would ease your way for updating to the latest Android version 5.0. 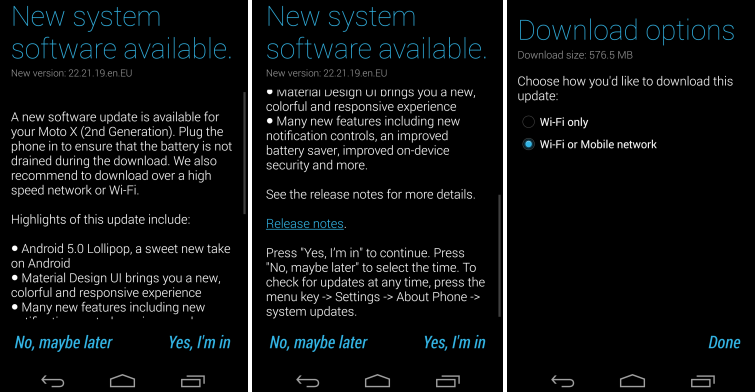