It’s alright to get bored with WhatsApp after some time. The same interface, the same smileys, inability to send or receive stickers are just a few things which might drive you away from WhatsApp. Though these aren’t really valid reasons to stop using WhatsApp, you might well want to give some other instant messaging apps a try.

Should You Really Shift from WhatsApp?

Should you try other messaging services?

I hope that sums it all.

The reason I don’t recommend anyone to shift from WhatsApp is because the world uses it. People do use other chat apps like Cubie or WeChat but the number is far less than the people using WhatsApp. I remember downloading a messaging app named Cubie on my phone and guess what? Out of the two hundred friends I have on WhatsApp I could just find two on Cubie. Next I tried WeChat. Surprisingly the number increased to fifteen. Next I tried Hike, the number reduced. I couldn’t resist the feeling to ask my friends “Why do you use Hike?” They said “to get a free recharge”. Now you know why people are on WeChat or Hike? They either love stickers and few additional features which these apps provide or they are there for free talktime! Anyways that’s why I recommend you to continue using WhatsApp while you try other apps like Hike, Nimbuzz or whatever.

Out of all the messaging apps I’ve tried apart from WhatsApp my favorites are:

It’s alright to call WeChat a mixture of WhatsAPp, Skype and all the other chatting apps out there. It allows you to send text and voice messages like WhatsApp, it allows you to video chat with your friends using your secondary camera like Skype and more. It reportedly uses less data and therefore works good even on slow internet connections without compromising on video or voice quality.

You can create groups on WeChat to communicate with all your friends at once. It allows you to have more number of people in each group than WhatsApp. Unlike WhatsApp the group size isn’t limited to 50 people. With WeChat you can not only send smileys, but also send animated smileys and stickers. Short of friends? WeChat helps you find people nearby. Chat with strangers, make friends, go on dates all with WeChat.

The best part about WeChat is that it’s available on computer as well. You can chat with all your WeChat friends using your computer (a feature which has been wanted by WhatsApp users since ages).

The name sounds girly ain’t it? Well there’s a friend who asked me to download it. Unfortunately she was the only friend I had on Cubie until she asked another common friend of ours to join Cubie. And now three of us chat on Cubie. Why? For fun. Three of us are fun loving people and it’s absolute fun to draw pictures on Cubie and send them over. Cubie allows you to make free voice calls over internet, watch YouTube videos inside the app and do more. It even allows you to send self destructing pictures like SnapChat. So Cubie in short is also a mixture of WhatsApp, Skype, SnapChat. 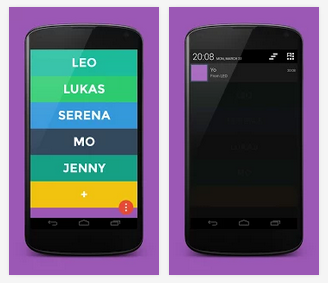 I first heard about this app when my friend Mohul wrote about it on Facebook. Though he criticized the app, I thought it’s worth a mention. You cannot really chat with anyone on Yo! You can just Yo others! By Yo I mean Yo! There’s nothing else you can do on Yo! We use Yo in our daily lives and is a nice way to remind others that you just remembered them. Of course the other person needs to have Yo too. Yo was launched just a week back and has already gained hundreds of thousands of users. It has reportedly faced some problems and bugs. It even got hacked in its first week, but now that the app has raised over a million dollars from venture capitalists, I predict they’ll focus a lot more on security. Meanwhile you can Yo!

While Viber can be used for sending text messages over internet, people usually use it for voice calling. I do the same. Viber is an essential component of my phone and whenever I have internet access, I use Viber. Whenever I don’t, I don’t make calls 😉 Kidding! You should definitely try Viber if you make a lot of voice calls. You can save a lot. Yes, you can also use Viber for online texting. Viber offers more smileys and stickers than WhatsApp.

Hike gives you control over your privacy. The lady next door, your aunties or your servant won’t see your last seen unless you want them too. It makes you incharge of your privacy. Do your parents often access your phone? Want to hide some chats from them? With Hike it is possible without installing any additional apps. Smileys are old fashioned. With Hike you can send stickers. Unlike the apps we’ve mentioned above, Hike doesn’t stop you from sending a zip or a document. Hike allows you to send any and all files you have. They do have a 100MB file size limit, but that’s more than enough. Trying to reach a friend who’s not online right now on Hike? Not an issue. Simple message him. Hike will send that message as an SMS with no additional cost to you and when your friend replies back, you will get a Hike message. Apart from that, Hike offers chat themes, free texting, 128-bit SSL security and more. Try Hike!

When it comes to chatting apps, there’s not much difference between each of them. Having said that, Skype too allows you to send text messages, make voice or video calls and do more. Unlike the apps we’ve mentioned previously, Skype also allows you to make calls to phone numbers, for a price of course. So if you often make international calls or make calls to landlines or mobile phones, you should consider trying Skype. Of course you need a stable internet connection to make calls over the internet. So you can consider getting a 3G connection and use Skype to make voice or video calls to anyone anywhere in the world.

Like I earlier said, people use Line and Hike to get free recharge. When they have it, the app either lies unused or is uninstalled. The review on their Play Store page speak the same. People complain about not getting recharges, unability to use free sticker offers, etc. You should definitely give Line a try if you are bored of your current chatting app. You might just find some of your friends using it. If not that, you’ll at least get some free talktime 😉

Some other instant messengers include Facebook Messenger, Hangouts and BBM. You can even try ChatOn if you are a hardcore fan of Samsung.