I’m not a great fan of watching videos online, I always prefer downloading them and then watching them so that if I end up liking them I can have them forever. However this is not the right way to go. It’s not legal to download YouTube videos and in worst cases in some countries you might end up paying a fine. Before we talk about blocking YouTube ads or any advertisements in general, I have a question for you. Is it ethical to block ads? I think no. Online publishers spend hours making something worth your time, and if you just block the ads, you’re taking away from them what’s actually theirs, revenue. Well if you still decide to block the ads, here’s how you can do it. 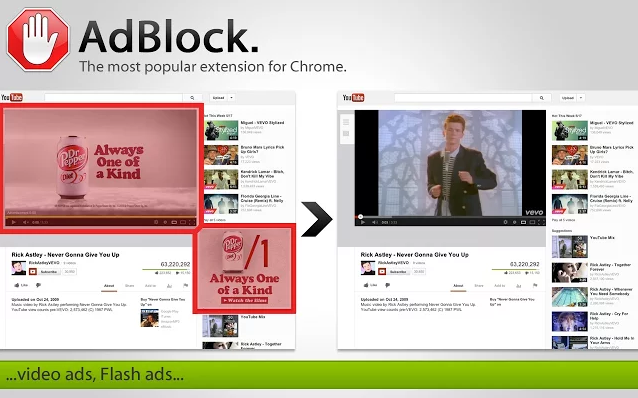 Blocking YT ads on Chrome with AdBlock is very easy. You just need to install AdBlock. Download AdBlock for Chrome, activate it and you are good to go.

There’s nothing else you need to do. Once activated, it not only hides ads on YouTube but also disables advertisements on Facebook, websites you surf daily, blogs and more.

AdBlock doesn’t merely hide the advertisements, but it stops the ads from being downloaded to your computer. So if you have a very basic internet connection, and you often end up spending minutes for a page to load, AdBlock might just make pages load faster by preventing ad scripts, images and flash videos from being downloaded automatically. It hardly consumes any memory and doesn’t slow Chrome. You can control each aspect of AdBlock with just a click of a button since it comes with an optional toolbar button. 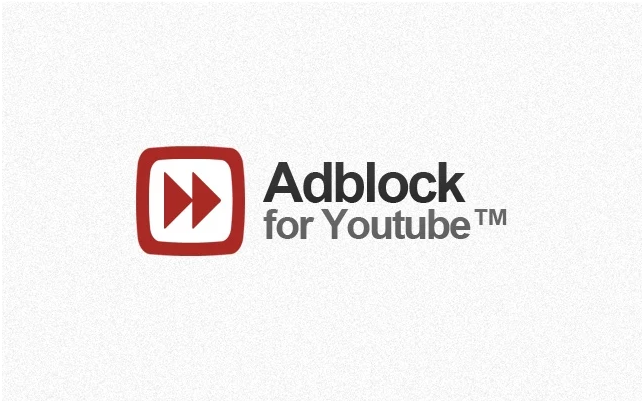 Don’t the names look same? They aren’t. There’s a difference, a small one. The Letter ‘B’ in this extension is small, and that’s what differentiates both these Chrome extensions. Both of these are from different publishers who have nothing to do with each other. Using this extension is simple.

Download and activate it. That’s it. No options, no bullshit. It successfully removes the ads shown before the actual video is played. However, this extension only works for YouTube. So if you’re looking for an all-rounder, go for AdBlock with a capital ‘B’. 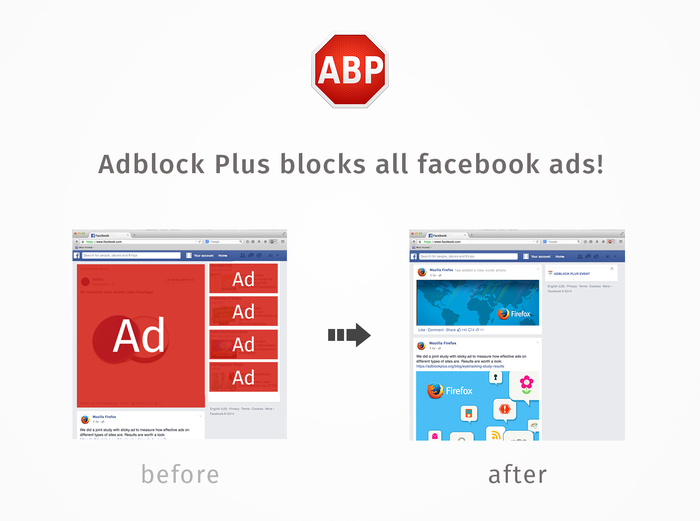 Blocking YouTube advertisements on Firefox isn’t very different than doing it on Chrome. It’s the same add-on, the same process, and the same result. Over 19 million Firefox users use this add-on and the fact that AdBlock Plus has got 5/5 nearly everywhere it’s listed makes it worth a try.

To use AdBlock Plus for Firefox, download it here and once it’s completed it’ll either be activated automatically or you’ll get a notification to do it. Activate it and you’re good to go. AdBlock Plus will not only hide YouTube advertisements but also prevent ad-filled Facebook from showing you any kind of ads. It hides all the banners you see on the YouTube video page, the banner that comes from nowhere while playing your favorite videos, the video ads you see before and during each video and all the others ads you are yet to see.

I tried looking for alternative ad blocking add-ons but ended up finding none. Apparently except AdBlock Plus no other add-on has been updated in ages. And moreover, if you’ve AdBlock Plus, why should you even think of trying something else? 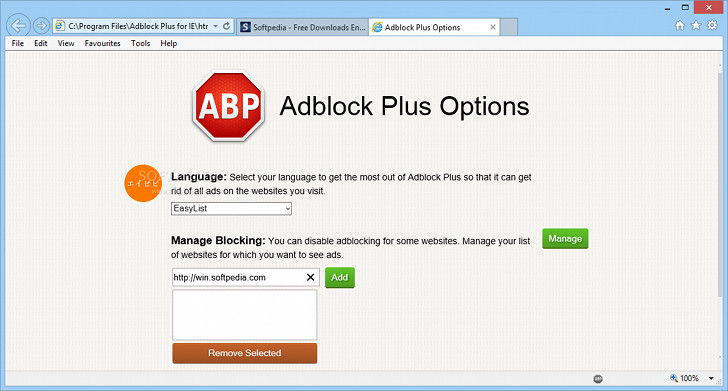 Hard to believe, but IE is worlds second most used web browser with over hundred million users daily! I’m not sure why people use Internet Explorer, may be because it comes on their system by default. I sure don’t like IE a lot. But well, ads show up on Internet Explorer too. While developing add-ons for Internet Explorer is not less than a nightmare, I could still find one for skipping YouTube ads.

While it’s not a browser add-on and you don’t install it the way you install add-ons on Firefox or Chrome, it pretty much does what it’s meant to. It can block ads on all sites, videos and flash games including YouTube. And using it is simple. Simply download the latest AdBlock Plus for Internet Explorer from here and once the setup is downloaded to your computer, install it like you install other software and you are good to go. You might need to restart Internet Explorer to see AdBlock Plus in action.

Since Internet Explorer is not at all developer-friendly, you might face some known issues like browser hanging up, an icon showing up in unusual places, ad blocking not functioning in Metro Mode, etc. So if you face any problems, just let us know in comments and alternatively reach the developers for help.

With brilliant browsers like Firefox & Chrome in the market, I doubt if anyone (except Mac users) use Safari. But if you’re a die-hard Safari fan and are not ready to move over, you can still hide YouTube ads on Safari.

I couldn’t find it on the Safari store, but you can still download Adblock Plus for Safari from the official AdBlock Plus website. Once you’ve downloaded it, just activate it if you haven’t done it already. And that’s it. It offers you an options panel as well just like it’s Chrome & Firefox counterparts. 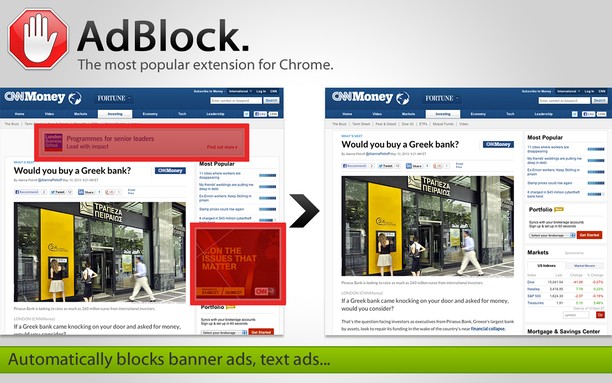 Like Chrome, there are two extensions available to block or skip YouTube ads. One is AdBlock Plus, and the other one is Adblock. Installing them is simple. Visit the add-on page and press the “Add to Opera” or “Install for Opera” button and the add-on will be downloaded, installed and activated automatically. Users have given the first one four starts while the other one five stars. And several users find Adblock for Opera slow and some even report system hanging up after installing the extension. So I leave it up to you. Try both fo them and stick to one which you like the most or which works the best on your computer.

Ads can appear anywhere, even on your Android and here’s how you can disable YouTube ads on your Android smartphone. Just download AdBlock Plus for Android from this link and install it like you install any other app from an external source. It’s not available on the Play Store since it blocks YouTube ads and apparently Google doesn’t like anyone messing with its services.

There’s a bunch of options you get with AdBlock Plus for Android, all of which are shown above. You can configure AdBlock Plus to filter ads, show acceptable ads (unobtrusive ads), filter subscription or hide the icon from the notifications bar just in case you prefer a clean look. If you want to disable ads forever, simply check the Start on Boot option and AdBlock will start automatically when your device boots.

Do you hate to use add-ons like I do? This is for you! You’ll need to spend an additional minute or two to get this to work. Here’s how to do it.

Step 1: Open a YouTube video. This trick should work with all YouTube videos, but to verify if it works or not try opening a video with some ads in it.

Step 2: Open the Developer Console by pressing Ctrl-Shift-J on Google Chrome, Ctrl-Shift-K on Firefox or F12 on Internet Explorer.

This will block all the YouTube ads forever. If you ever change your mind and want to see the ads again, follow the first two steps and paste the following code instead and hit Enter:

I’m not sure how long this trick to block YouTube ads will work, but while it’s working let’s use it and save on some memory without using an add-on. If this trick ever ceases to work, you can simply use one of the add-ons or extensions mentioned above.

Well, that’s how you block YouTube advertisements on YouTube. I’m not a fan of ad blocking, and I recommend you not to block ads, that’s the only way webmasters online make money and if you stop giving them what deserve, sooner or later you’ll stop to see great content on the internet.