Talk about misusing social media, the recent uproar on fake ‘Assam Rape Fest’ story has left people shaken. One of the American news team ‘NationalReport.net’ has gone ahead to mar Indian traditions by propagating bogus news claiming that India holds an annual rape festival in Assam starting on 3rd November. During this occasion, girls aged between 7-16 are raped, if not fleeing to safety.

The website titles itself to be an accurate news generator, and is popular in America. After outcry over such incredulous story, they tried to dowse this issue by naming it as satire news. NationalReport.net however did not have it cited on pages anywhere that the site publishes false stories. In a matter of few days, this sham tale has spread to major social networking sites like Facebook, Twitter, which picked up thousands of shares, counting more. Many forums and internet podiums also followed in trail. 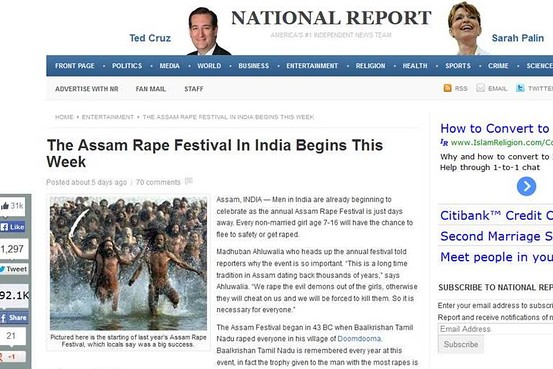 Horrendously, the NationalReport put forward a post on Facebook, which warns foreign travelers to stay away from India during the ‘Assam Rape Fest’. This collected different reactions from people all around the world. The picture used in the story was that of Nagga Sadhus, who never invented such an unlawful tradition. Ironically, web archives of NationalReport proves that they have erased their previous disclaimer, updating to new one stating, the site may launch fictitious names, or incidences, being a political satire online publication.

On 7th November 2013, Assam CID Police registered case of defamation against this website. The department also seeks help of the India Computer Emergency Response Team, (a regulatory agency countering cybercrimes). This case is registered under the ITA section 66A, and 67A that furnishes punishment to those misusing communication services in sending messages that are offensive, transmitting and publishing material that are sexually explicit.

D Upadhya, the senior superintendent of CID police revealed that investigations hold Uganda being the place where the crime originated. However, the results are tentative and criminal investigation branch has asked Ugandan website’s administrator for cooperation in this enquiry.

Reactions All around the Globe

Many people commented on this dismal act, condemning behavior of this online publication, whereas others went forth to express their anger over callous nature of practices against women in India. A significant row on the issue led Indian citizens and media to mull over cybercrime. Social networking sites are volatile with reactions mingled with hate against India, loss of faith, and women rights.

While constant debate supports India’s view in contradiction to NationalReport’s claim, some believe the news strongly. In midst of such chaos, I opine that every one of us should do a ground level research on bizarre news, rather than believing false stories. Internet media is an open platform susceptible to malignant acts. It is our responsibility to reason the pros and cons of any statement posted online, backed by facts. Positive efforts on this will perhaps help in reducing controversies.