So, you are lying in bed at night, fiddling with your phone, trying to feed that content-hungry mind of yours, even though you need to get some shut eye. But, all that blinding light from the phone screen just strains your eyes and you soon find it very uncomfortable. Of course, you can always invert the colors with a few taps, but then it would be messing with image colors. So, these days, content-based apps have started coming up with a handy night mode feature.

One of the latest apps to do so is the official Twitter app. So, to all you night owls, ninjas and goth people out there, you now have a dark, night mode feature to Tweet away in the dark. This is good news for your eyes as it is more comfortable to read light text on a dark background, rather than dark text on a light background during night.

Now on Android! Turn on night mode to Tweet in the dark. ?https://t.co/XVpmQeHdAk pic.twitter.com/vrIDEM22vO

This much-awaited feature has only been released for Android, and if you are an iOS user, hard luck buddy. For the time being, you’ll just have to stick to apps like Tweetbot, which already offer dark mode. Then again, there has been no official word on whether this update would be released for iOS or not. We’ll just have to wait and watch.

Night mode on the official app is actually quite beautiful. It changes the usual white background into a dark navy blue one and the colour of the text changes from black to white, accenting the background very well. In my opinion, the night mode of the app looks way cooler than the normal mode. I am sure this single new feature will trigger a migration of users from other third party twitter apps to the official one.

So, all you android users, here are the steps to enable night mode on your official Twitter app: 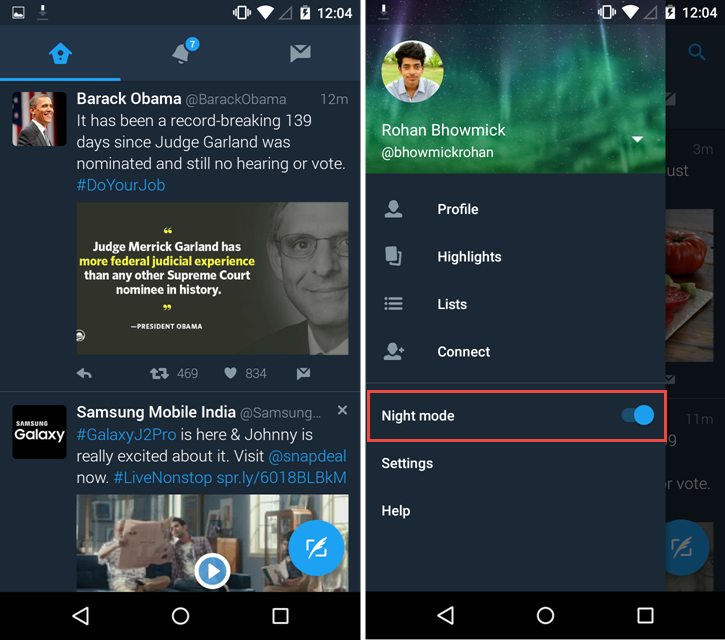 It’s a very basic implementation. There is no way for dark mode to trigger automatically during specific times of the day or during certain lighting conditions. But hey, something is definitely better than nothing, and you might actually like this mode so much that you might decide to keep it on all the time. So, go check it out on the Google Play Store and happy tweeting out there, you nocturnal social animals.