Even after having an alarm clock in place in our mobile phones, most of us fail to get up in the morning. We have a bad habit of either snoozing or turning off the alarm clock. So this actually helps you to not get up on most days and get late for work. Though there aren’t any sure-shot ways to wake up in the morning since our body will always find a way out to get that 5 extra minutes of sleep, there are some Android apps which might just help you get up on time on most of the days. I have tried all these apps and most of them successfully helped me in getting up on time, every time!

The makers of this fabulous app know that people struggle to get up in the morning and that’s why they have Puzzle Alarm Clock freely available on Google Play. Puzzle Alarm Clock doesn’t allow you to turn off the alarm clock unless it makes sure that you’ve got up. The free version of Puzzle Alarm Clock features – disabling alarm with QR code, NFC tag, solving mathematical equations, memory cards, captchas, patterns and much more. It gives you up to 5 puzzles to solve one after one which wakes you up. Alarm doesn’t stop to ring unless you’ve solved all the puzzles. There are 3 difficulty levels. If you over-sleep often keep the difficulty level to 3, 2 if you get up on time sometimes and 1 if you get up in time almost all the time. This is a premium feature.

Puzzle Alarm Clock also allows you to set up recurring alarms, so if you sleep after solving a few puzzles, alarm will ring again and make you solve some more puzzles ensuring that you get up at least this time!

extreme over-sleeping. This alarm clock app includes features which help prevent excessive snoozing and get you out of bed. Using this app, you can set your morning alarm to slowly increase in volume and wake you up gently. There’s an extra-large snooze button in place not to encourage snoozing but to stop you from accidentally turning off the alarm instead of snoozing. You can set the most number of snoozes per alarm and make the snooze time decrease after every snooze.

Alarm Clock Plus is being used by over 1 million users

and I am not making a fool of you! They boast of being the most featured and stable alarm clock app available for Android smartphones and tablets.

It allows you to set an unlimited number of alarms with varying sound levels. Pre-loaded alarm clocks in most Android smartphones already have this feature, but if your smart phone doesn’t, you must install Alarm Clock Plus now!

Some of the exciting features of Alarm Clock Plus are – Alarm clock volume fade in, nap alarm clock, math alarm, music alarm, app alarm, flashlight alarm and many more. Flashlight feature is hardly available on any other alarm apps for Android. Alarm Clock Plus also speaks time or weather before waking you up. There are several more features and more are added everytime they release a new update.

The name of this app says everything about it. To 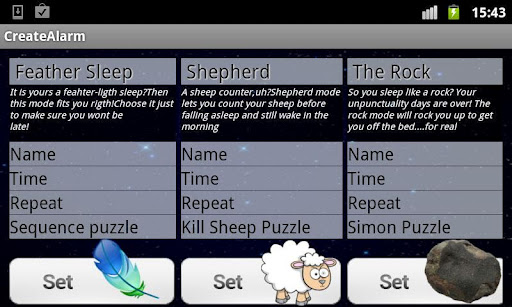 wake you up everyday Alarm Puzzle allows you to select the wake up mode depending on how deep your sleep is.

Have a look at Alarm Puzzle on Google Play Store – https://play.google.com/store/apps/details?id=zeusrapps.alarm

These are some of the best apps I could find on Google Play Store. There may be several other apps available, I am not sure, try them and if you find them worth a mention here, email us!