Do you enjoy 3D movies?

If yes, haven’t you ever thought to throw that dorky glasses?

Well, the time is near when you won’t need 3D glasses to watch your favorite movies in a three-dimensional display.

Yeah, it’s true. From the time television was invented, scientists have always been trying to improve the technology and interestingly enough, they presented 3D televisions. And now they’re working to improve the 3D viewing experience of people, and of course you guessed it correct – they’re trying to develop a 3D screen model which can show 3D pictures and animations (moving objects) without the need of wearing those annoying glasses.

But are they successful? The answer is sweet and simple – Yes. At the present, few technologies are developed which can give you 3D experience without wearing 3D glasses. But that’s not all the world need – of course, the technology should be easily available, cost-effective, easy to deploy, and friendly to the old technology or products, i.e., it should be applicable over the 3D screens we’re currently using otherwise what’s its use if we need to throw old 3D screens to trash can.

We, humans, are able to see this world in three-dimensions because of the placement of our eyes. Our eyes are placed uniquely apart from each other in such a manner that both eyes see the world in two different views with a slight difference in viewing angle. Human Being is a marvelous machine – our brain intelligently combines the images from each eye such that it creates a perception of depth in the images, thus giving us a 3D view of the world. It’s interesting. Isn’t it? 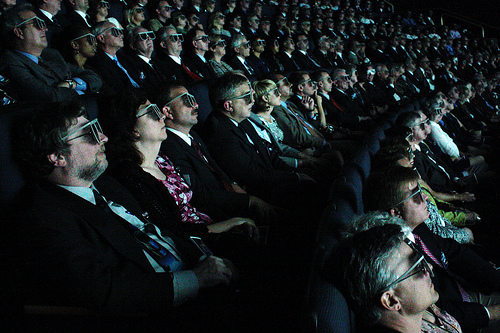 Let’s visualize how the current 3D technology works. The trick used to show 3D movies in present time is by sending a slightly different, offset image to each eye. But how come we see one picture and not two pictures if two different images are sent to each eye? That’s the work of the 3D glasses. Most modern 3D blockbusters use special glasses aka 3D glasses for handling this task. What these glasses do is to allow only one polarization of light through one lens, thus, only one image to each eye, and that’s why you don’t see two images but only one 3D picture. Polarization of light means the direction in which the EM (electro magnetic) waves of the light vibrate, i.e., left-right, up-down, or anywhere in between.

Let’s see what happens when you sit at the theater to watch any 3D movie such as Avatar, Ice Age: Continental Drift, Madagascar 3, or a bollywood movie like Raaz 3, etc. Two projectors at the theater display two different versions of the movie at the same time having different polarizations, one having polarized left-right and the other having polarized up-down. The glasses do the job of sending these two variants of images into each of the eye, which brain estimates as two images of same picture having slight difference and thus, creates a 3D model of the picture. That’s why you’re able to watch movies in 3D. This is the reason that the screen looks blurred when you see it without the glasses, because there are actually two videos (of the same movie) playing at the same time.

But the need of two projectors that are perfectly synced with each other (showing the same movie without any time differences) is expensive and of course, require people to wear 3D glasses. There are some technologies which don’t need these glasses to show 3D pictures – these technologies make use of a special coating on the screen which sends some of the light to each of the eye, creating a 3D picture. It’s used in many products like Nintendo’s 3DS or smart phones like HTC Evo 3D. But this technology needs the projector to lie behind the screen, so it’s not applicable for current theaters which have projectors in front of the screen.

What about the new technology?

The new method proposed by researchers in South Korea would allow movie fans to just sit and watch 3D movies without any glasses or such. The research is published in Optics Express.

The proposed method would allow theaters with projectors in front of the screen to show 3D movies to people without making them wear the special glasses. In this method, a special array is present in front of the projector which polarizes the light. Then a filter covering the screen obscures the different vertical regions of the screen – the movie has the right-eye and left-eye images interleaved in vertical columns with one another. Then the trick is to have the light visible to the left eye contain the left-eye image and the light visible to the right eye contain the right-eye image.

The new method, though cost-effective and easy to implement, has a disadvantage of having low resolution because it blocks some light to the different eyes. Researchers expect and hope that the companies would be interested in this new method and would invest financially to improve the technology, thus bringing 3D-without-glasses technology to the masses.

Although this technology sounds interesting, it won’t be quick to become a standard but the time is not far when you will be watching your favorite movies in three dimensions with your eyes only.